When Androids Pray is set in a world where everyone has ceased caring. Big Brother came, set up it’s cameras and then stopped watching them. There is no government to protect any more, nothing to rebel against, no order to topple. Everything is run by an invisible hand, money changing hands. The popular programs on the multitude of TV-channels and their contests have taken the place of democracy. There, winners are hurried off to new lives and losers are left behind. Meaning is created through excess and popularity. The faces that flash past on the enormous TV-screens are all living lives of excess, and others mimic it, hoping to find whatever it is that makes the commercial smiles so radiant and filled with content pleasure.

All heavy labor, all emotional labor, all service labor has been outsourced to Androids. The only areas where humans still work are areas where value and meaning is generated. Areas where individuality is bartered with, sold as a product and betted on, like a beauty pageant that measures the ability to get attention, rather than desirability. Androids are almost identical to humans, biologically similar yet grown in vats and genetically designed from their conception. 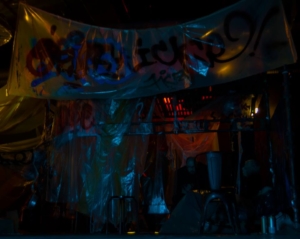 Since social security takes care of all the basic needs, there was no reason to earn money for one’s upkeep. Instead, a fame economy replaced it. What you can do and where you can go is based on fame and the amount of followers you have online. When ‘being someone’ is everything, people go to extremes in order to attract attention. Fame determines whether you get a drink at the bar

For all those who aren’t in the contest or aren’t interesting enough to get enough followers, life is an exceedingly nihilistic pursuit. They get their food served for free, they get their monthly base credits for purchases on time, but nothing is demanded of them. They are completely meaningless, unless they can come up with a purpose on their own.

IMPORTANT NOTE: This is a fully globalized world where gender, sexuality and race have ceased to matter a long time ago. There will be no play upon differences between genders, sexualities or skin colors and any kind of gender identity is accepted without question.

The main divide is between Androids and Humans, where Humans in society are seen as valuable, worthy and as individuals who are rarely judged for their choices. Meanwhile, Androids are seen by society as a whole as property, as slaves, as lacking any kind of value. For some humans, an Android is seen as a beloved pet – someone you would of course put out of their misery if need be, but would otherwise like to keep around. These humans are seen as deviants.

Here are the guidelines for the clothing that we want to see at the larp. The link to the clothing guide is:
Here

This palette is what we will use as a guideline for the clothing. We want a faded color palette, with lots of browns, greys and dark colors in general. Things that would not stand out too much in muted lighting and against the color of rainy skies.

This is the world as the 80s might have envisioned it. In this world, technology isn’t cool and flashy. Few notice it, but it is omnipresent in those that live within the mainstream. It’s there in the everyday things that have been automatized and that you don’t think about anymore. It could be implants that stabilizes your body temperature and keeps you synced with stand-by health services, a camera in your jacket that automatically records your interactions with others or a chip that continuously reports your location to your employer. Now, of course, the more extravagant modifications are only available to the interesting and successful ones. Most just receive what they need to subsist but nothing more.

We want to see futuristic elements represented in clothing primarily based on choice of material and the cutting of the clothes. Classic fashion mixed with futuristic aesthetics and without too contrasting colours. We remind you that gender doesn’t matter here so feel free to mix expressions.

This is science fiction noir so go introvert and low key and not shiny techy space opera. If you are richer you can go slightly more fashion show style with asymmetrical and a bit impractical creations. Most characters will be living in the slum areas of the outskirts of the city. So an extra greasy shirt or a ragged leather jacket is often a good choice.

Avoid traditional uniforms and go for shirts, boleros, ties, matte leather, plastic, geometrical shapes or classic suits with modified lapels(or other details).
We would also like to keep make-up as an expression for known Android characters to use. (Discrete every-day use is okay though.)

Yes:
Dystopian sci-fi
Mixed gender expressions
Everyday practical
Transparent plastic outdoor clothes(The larp will be played indoors but have parts that represents outdoors so outdoor clothing that is not too warm is recommended.)

For Androids:
Known Androids dress appropriately for their occupation but also emphasize a synthetic aesthetic to minimize compassion and sympathy as humans tend to get annoyed and distracted by having those feelings. Smooth foundation with a plastic feeling or slightly odd lenses are good examples. As Androids are almost indistinguishable from humans on a biological level, this is an ingame alteration of looks that Android characters do.