The larp is about a group of inhabitants of the City’s slums, living lives outside safety, outside security, and fighting for that which gives them hope and meaning in the darkness. They are the people that have the shadow of the city as their home, and that means family, friends and things to fight for. What are you willing to do, to keep the few things that you have?

Meanwhile, the first truly free Androids will arrive to try to carve out a new existence in a place where there is little compassion or understanding for newcomers.

During the larp, players will explore these rough and dirty lives of criminals, corrupt cops, outcasts and illegal Androids in the slums of the City. Everyone has their own reasons for being there, but each story will intertwine with dozens of others.

The larp is played in three acts, with small breaks between them for calibration of play. These act breaks will at most be 5-10 minutes long. 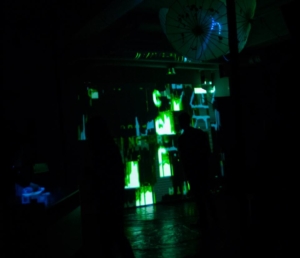 The acts are:
Day, Evening, Night

The first act, Day, representing Hope. The characters establish the normal state of things in their areas. Conflicts, relations and chains of events are started without any major changes in the dynamics or the mood of the city. It is a low intensity act where you get to familiarize yourself with the characters and the dynamics around them. The seedier business is not taking place yet and the police force are still relatively comfortable in the slums. The rumors about free Androids have yet to reach the ears of the people living there and the Androids themselves are doing their best to fit in. At the end of the first act, everyone will have written between one and three words on a wall, representing their hopes and dreams and things they care for.

The second act, Evening, representing Reality. The forces of law enforcement retreat from the slums and only the corrupt cops remain, those with more ties to the criminals than with mainstream society. Drug use, music and sex will become more prominent while conflicts and relationships heat up. The rumors about the freedom of Androids will slowly trickle out to the people living there and the gang members and the local Androids will have to confront this new state of things. Will they be shunned and ostracized, or will they find a place? Will they become enslaved once more?

The third act, Night, representing Fear. The decisions and events of the previous acts will approach their inevitable consequences. In the dark, conflicts have dangerous consequences and relationships turn bitter or desperately passionate. The illegal drug dens open their doors and people are afraid when they walk the streets of the slums. The free Androids will face whatever fate awaits them, either as the newest victims of the horrible trafficking business, as free and short-lived members of the criminal underground or perhaps something entirely different.

At the end of the third act, every character will meet one of three ends. These ends will be represented by three different actions that players will take.

The characters will be written by the organizers, then expanded upon by the players. Each character will be defined by a set of opinions and social circumstances, as well as a few individual notes about them.

We call these ‘defining traits’, something that the players later can build upon in order to enrich their own experience.

A character will have the following defining traits:

The players are then encouraged to get in touch with the others in their core group, most importantly, and social group secondarily, to create new relations or deepen existing ones.