Androids were created as tools.
Androids were taught to be humans.
Androids awoke to their own slavery.
Some escaped and earned their freedom.
This is the story of where they ended up.

When you left the City, you ended up here, in its shadow
Here, life has different rules and different goals
You are free, but freedom is not what you hoped for
Like before, Androids are traded like commodities
Like before, your lifespan might be limited and you will never know
To survive here, you must adapt, wither away or find new faith
And when Androids pray, do they pray to electric gods? 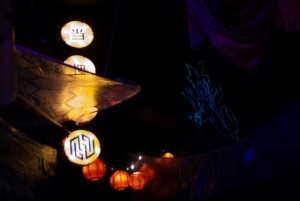 When Androids Pray is a Nordic larp, produced by the organization Atropos in cooperation with Ariadne’s Red Thread, inspired by the movie Blade Runner in mood and feeling. It is played in three separate runs on 15-17th of December, 2017. It takes place in the same world as ‘Do Androids Dream?’ and is a larp about desperate survival, slavery and spiritualism. It is a larp about Androids and their place in a lawless society.

Also, it is about the feeling of eating noodles at a dirty little shack in the shadow of the City, rain smattering against the corrugated roof above.

When Androids Pray is finished!

We, the Organizers, want to thank a lot of people for making this possible to run. Thank you so much. You are all amazing and we are very grateful to have people like you with us!